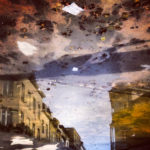 It is out of “Cahos” (in the spelling of Jean-Féry Rebel) that fire, air, water and earth arose.

These four elements explained the composition of the world to the ancient Greeks, according to whom each substance present in the universe consists of varying amounts of one or more of these elements, defining the qualities of each material (hot or cold, dry or wet, degree of volatility etc). A fifth element, ether, the celestial and most noble element — the air breathed by the gods — explained the intangible such as the soul, gravity or radiant light.

The theme of primal formation was a great inspiration to French composers of the Grand Siècle. Jean-Féry Rebel employed total harmonic chaos to represent “the confusion which reigned between the Elements before that Instant when, subject to immutable laws, they assumed the place ascribed to them in the Order of Nature.”

Rebel composed his ballet Les Éléments a few years after André Cardinal Destouches and Michel-Richard Delalande’s opera-ballet of the same name was performed in 1721 at the Palais des Tuileries. One of the dancers involved was the young Louis XV, then aged 11 years. The production enjoyed phenomenal success, and the work was to remain in the repertoire for more than 60 years. Following a prologue describing the chaos provoked by Destiny to bring order to the elements, four scenes transport us to the palaces of Neptune (Water) and Juno (Air), to the temple of Vesta (Fire), and finally to Pomona’s garden (Earth).

The storm in the opera Alcione by Marin Marais describes the unleashing of the elements so well that this piece, although quite short, found its way to all the courts of Europe. Marais was not the first to compose a storm scene, but he managed to represent the fury of the elements as no one had previously — so well, in fact, that these two minutes of music alone were to ensure the success of the entire opera. “Marais imagined that the bass-line of his tempest should be performed not only by the Bassoons and Bass-Violins, but also on the drums, which, rolling constantly, form a dull and lugubrious sound, which, when joined to the piercing, treble tones from the top of the Violins’ E-strings, and from the Oboes, lets us hear all the fury & horror of an agitated sea, & a furious wind which rumbles & whistles: a real & effective storm.”